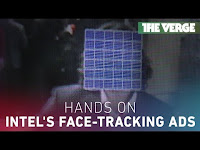 Intel has just announced a new technology, actually a protocol of what seems to be a reality take on those sci-fi movies as Total Rekall and Minority Report (Tom Cruise).

Basically, it scans your face and figures out if you're male or female. Huh, that's it.

Imagine, you're passing by, an electronic billboard detects you and displays ads that targets you.

Yes, they will know you.


Makes one realize, that one is better off living in today's age, where privacy, well, there still something left.

But wait, isn't this technology already being put into place? Hmmm.