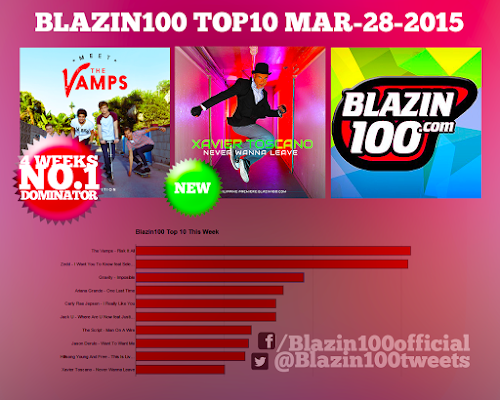 Xavier Toscano debuts at number 10 with Never Wanna Leave. The station has never received such overwhelming response from a new artist and music. And the votes came both from avid fans and those who first time heard the song.

Hillsong Young and Free returns to the countdown with This Is Living feat Lecrae at nine.

Jason Derulo inches up with Want To Want Me at eight. But definitely not on the wire is The Script at seven.

Where are they now this week? Jack U and Justin Bieber are still at six with Where Are U Now.

Enterting top five is Carly Rae and she definitely is singing her heart out "I Really Like You" at five.

Four goes to Ariana whose performance with the Bieb recently went viral. One Last Time? Definitely not!

Three is an OPM entry from Gravity with Imposible.

And we got a tough competition last week and winning just by a hairline, The Vamps owned the month of March in its fourth as number one with Risk It All and Zedd and Selena holds on to number two with I Want You To Know.
Blog Charts