What Is The Price of Alcatel One Touch Hero in the Philippines: Specs and Impressions Review 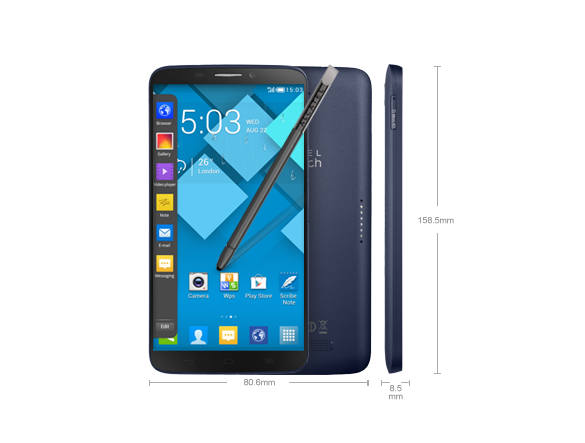 The price of Alcatel One Touch Hero in Philippine Peso is between Php16,999 to 19,999Php. Alcatel has just released this phone January 2014, although we heard of it, September of last year, below is our impressions review.

2014 indeed continues to be the momentum for phablets. Alcatel is not new to this as its Idol series has been leaning onto the phablet side lately.


The One Touch Hero seems to be bearing the banner now for the company, as it sports a 6 inch IPS 1080P display, a quadcore 1.5ghz processor, 2 gigs of ram and dual sim capacity and 3G capability.

It's a decent cheap phablet, for who:

It's fair enough for people who wanna use it as a
Not recommended for:

It's 2 gigs of ram and 1.5ghz mediatek processor will do the job for you with tasks listed above. But not really for heavy duty gaming.

I highly recommend this for people who really use the internet a lot, not just for Facebooking, I mean medium productivity tasks, like posting blogs, taking notes, accessing cloud drives. This can do it. 2 gigs of ram is okay. 8 gigs of ROM though, well you need extra microSD here, if you're app savvy.

A 1080P IPS display is beautiful enough. And what I like about IPS displays, which by the way is the same display tech present on iPhones, is that it doesn't hurt your eyes. I don't know with others, but Samsung OLED screens are visually traumatic, it really hurts in the eyes.

The body dimensions is tolerable: 158.5 x 80.6 x 8.5 mm (6.24 x 3.17 x 0.33 in). It's something you can still hold even with one hand, I've used my phablet single handledly, although it's limited only to pulling down notifications or pushing buttons, tapping on icons and what not and not full scale typing as you really need both hands.

Battery is 3400 mAh, massive. But with a screen that big, hmm, battery can last probably 3 quarters of a day.

It's camera is 13 megapixels, does the job already. It's front facing is 2 megapixels, great if you are taking selfies outdoors.

The design pretty much reminds you of Nexus 5 or LG G2, haha. Well both are still made by LG. But I like how thin the bezels are, really thin, I am impressed! Like I wanna have this as pang robo or driver phone.

Oh, yeah speaking of driver, it is dual,  one tray is microSIM which is the 3G one, the other is the GSM sim.

Ah, it's not LTE, so sorry folks. But really since, it's 2014 and if you're into serious phablets, get an LTE one. Unfortunately, I think, Alcatel doesn't have any LTE unit.

My biggest gripe on Alcatel phones are how easily the paint wears off, like it's so ugly, if you scratch or drop your phone or like if you don't put it on jelly cases, it will get scratches.

It's available in white and black. And it has surprisingly, before I forget, a stylus! If you feel like using it go ahead, I think you can only make full use of it, if the phone itself comes with great software features, just like those those floating menus on Galaxy Note 3. Other than that, a stylus, is just like an excuse not to use your fingers.

And yes, there is a free bluetooth phone and induction charger, wow??, why didn't this phone come out last December? Grrr.

WHY GET THIS PHONE?

DONT BUY THIS PHONE BECAUSE:

CONTENDER DEVICES OR CONSIDER BUYING THESE PHABLETS INSTEAD:
Below are the full specs of the phone via GSMArena

Disclaimer. We can not guarantee that the information on this page is 100% correct.