Acer Chromebook Tab 10 in the Philippines Priced at Php21,000 Pesos 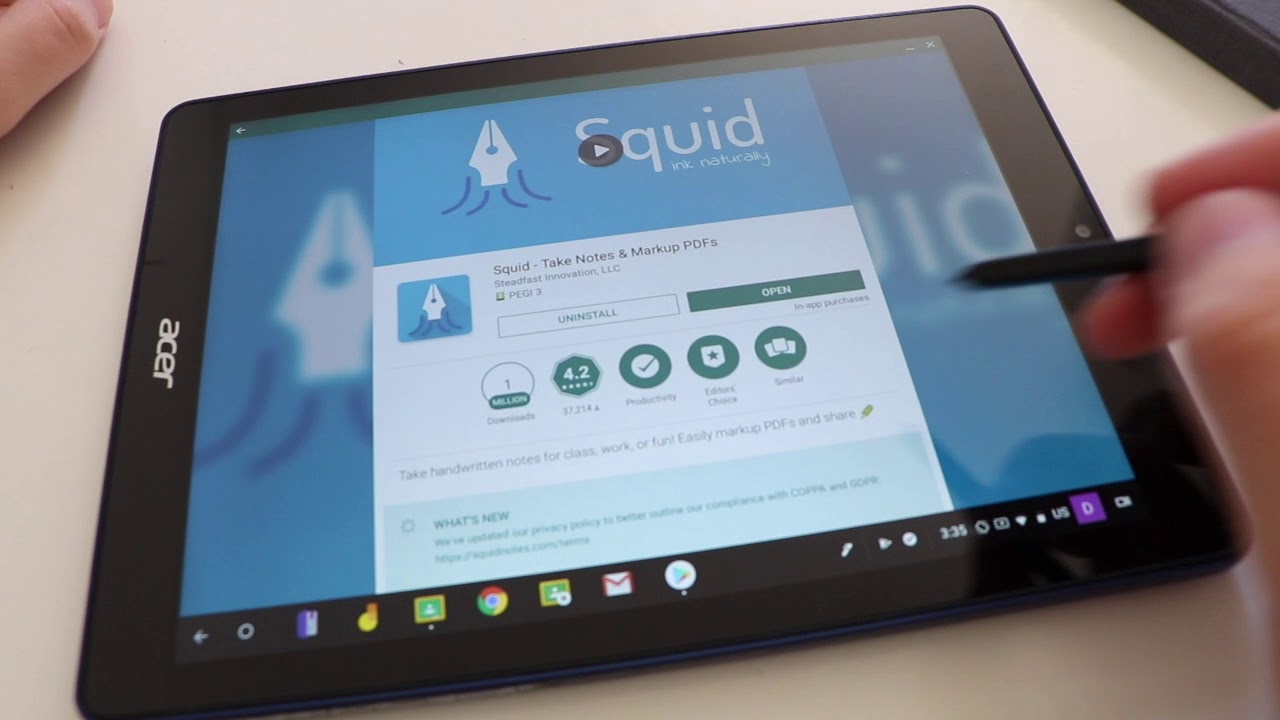 Acer Chromebook Tab 10 is an unusual device, and therefore curious. First of all, it has Chrome OS , and this does not make it too mainstream. Moreover, it is a tablet , which in itself (iPad apart) is a slightly mistreated category. But it does not have a keyboard dock, so it's true tablet with Chrome OS, which is an even more rare pearl. Join us that it is compatible with Android apps and, right from these days, even with Linux in the stable channel.


In the box of Chromebook Tab 10 you will find tablets, power supply and manuals. Nothing more, nothing less. A keyboard (Bluetooth) is the most serious fault, which you must necessarily make up for yourself.

Acer Chromebook Tab 10 is made with a blue plastic knurled body, which also has its own elegance. The weight is not however content: 516 grams in the long run. (They are also less than 550 declared though.) Even the dimensions are not reduced to the minimum terms, and the frames around the 9.7 "display are more than obvious. In short, with one hand, it is practically impossible to tighten it from side to side.

On the other hand, we point out the presence of a special slot in the body, in which a Wacom "electromagnetic resonance" pen is inserted . It is something more than a trivial capacitive stylus, especially in terms of precision. It could also be called overkill on such a device, but it certainly does not hurt.

Other things to highlight are the Type-C port for charging and a microSD slot to expand the memory. We also have two speakers on the short sides, arranged one on the diagonal of the other.

From the point of view of connectivity we find Wi-Fi ac and Bluetooth 4.1. Then we have an audio port and a USB-C with video output support, which in fact fits well with one of the pen modes (we'll talk about it below).

There are also two cameras . The front one shoots at 1,600 x 1,200 pixels, or 2 megapixels; the rear one at 2.592 x 1.944 pixels or 5 megapixel. Do not expect anything special from either, but if you have to do a video call at least you will not be walking. The interface of the app for Chrome OS, however, is really basic, and in practice it will only allow you to shoot.

The Acer Chromebook Tab 10 screen  is precisely a 9.7 "IPS resolution 2048 x 1536 pixels. The maximum brightness is quite good, so you can read it pretty well outdoors. However, there is no light sensor. The viewing angles are close to the flat corner and the ability to scale the elements on the screen helps to get them at the right size. There is a lack of color saturation, but overall it is pleasant for both reading and watching movies. Too bad only for the cornices, but they are quite typical.

Chromebook Tab 10 is not easy to judge, more than anything because it has no equal. Comparing it from an Android tablet is unfair and above all incorrect. If you want an Android tablet, take an Android tablet. It should also be specified that this Acer device has been expressly designed for education , for schools. It is no coincidence that even on its official page there is the slogan "lessons come to life". Only secondarily it arrived on the consumer market.

From a commercial point of view it is therefore a device for "curious", for those who want to try Chrome OS in an unusual format, which benefits from the integration of Android apps . However, the latter is not always impeccable and crystalline. Sometimes there is some incompatibility, but in general this Chromebook is quite good to pretend to be an Android tablet. The main apps all work, from Facebook to Instagram, going through all those of Google. The only thing is that the app drawer tends to become confusing and crowded easily and it would take some more organization options and above all some filter.

Moreover, in these days, Linux support has arrived in the stable branch. In practice it is a terminal, from which you can install the app that sometimes through a simple apt-get. Alternatively, if you have directly downloaded a package, you can install it from the file manager in the dedicated space dedicated to Linux.

Calling "stable" support, however, is a bit of a euphemism, and if already the Android apps can sometimes test the system, Linux are able to give it the coup de grace. Sometimes we have to restart everything to return to having a snappy tablet. However, we used GIMP, Chromium, Thunderbird, Emacs, Vim and other software, which turned out well or badly. The problem is that the tablet runs all in full screen, and the hundred windows of GIMP, just to name one, were all maximized. Sometimes there are problems of usability, even before incompatibility. And be clear that to think about using Linux really you will have to get a keyboard and mouse (Bluetooth). Meanwhile, because the virtual keyboard does not work with the Linux app, and then because it is a system that is not designed for touch input only.

Speaking of input,  we liked the Wacom pen very much. You can use it to write, with remarkable precision (the palm rejection is impeccable), and also to highlight points on the screen, perhaps during a presentation made using the video output of the Type-C port. It can also be used to capture screenshots and edit them on the fly. In short, it is well implemented in the system and works well.

Coming back to the operating system for a moment, Chrome OS runs well, but feels a lack of a real keyboard. The virtual one works, but not as good as on Android. For example, text prediction is only active by writing in swipe mode, and as for Gboard configuration options it has an infinity more. But it is certainly not just a keyboard fact. For example, the fact that apps are only open in fullscreen  can cause some problems (especially, as we have already said, with Linux). In short, it is difficult to make three types of different applications coexist in a single container. On the other hand, there is the split screen, which on average works well, even if not with all the apps, but he too could be more complete. However, the track is right, but at the moment the traditional Chromebooks (with physical keyboard and mouse / touchpad) have an extra gear from the point of view of immediacy.

Ultimately, on Chromebook Tab 10 : Chrome OS runs well (within the limits of the hardware), the Android apps are generally compatible but there are some problems here and there, Linux is really more educational than anything else; learn how to use the shell, how it is managed and how the filesystem works, but you can not really rely on Linux apps, which can slow down the system to the point of having to reboot to make it useable again.

The battery of Chromebook Tab 10 is not a record, but is also quite well squeezed. Keeping the brightness at 50% or less and with moderate use, the school day will take you home, and even something more. We say 6-7 hours of mixed use, but then it depends a lot on what you do. With Netflix in streaming and 100% brightness you will get over a little 5 hours, just to give you another comparison.

It is not entirely easy to judge the price of the Acer Chromebook Tab 10 . The official website recommends buying it from Monclick , where it currently costs 21,828.47 Philippine Piso; the launch price should be 20,952.83 Philippine Piso. It is something more than the average Android tablet of the same range, but we must not forget the presence of the Wacom stylus, and the fact that this is not an Android tablet. What is certain is that, for now, it is with the latter who must deal with it. If then in the fray we should also throw iPad ... but we will not do it, because they are deeply different devices.

Acer Chromebook Tab 10 is a device for students. And for curious. Curious students will be on horseback! It is not just our irony, because a tablet with Chrome OS is a rare pearl today, and should be treated as such. Think of being able to perform with relative simplicity the Android app (with a generally good compatibility) and also the Linux ones (with a much more problematic compatibility and usability) on such a device is fascinating (for the "curious") and didactic (for the student). Join us with a nice screen, a respectable Wacom stylus, and you'll have a versatile tablet as few. But there are some hardware limitations, which are particularly felt if combined with Linux support, while the price is not literally low, but we will not be here to remind you that the tablet is unique.