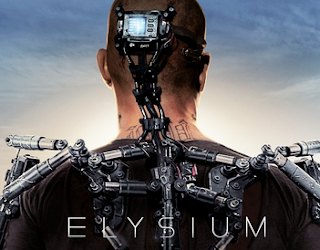 September 4, 2013, at the premiere of the science fiction action movie Elysium, it was not as packed as we expect it to be at the Ayala Cinemas in Ayala Center Cebu.

But it was enough to say that Elysium's first day was okay, most of the movie goers if not college students are foreigners, middle aged couples and even oldies.

There's so much hype that went out for this film, so we could not afford to miss this. But did it live up to its expectation? Let us find out.


Elysium is a story about now set in a futuristic world. It's about politics, human trafficking, health care, basically when you think about Mexicans and those mishaps at the border of the US, this is pretty much what the movie is all about.

It is action packed, fast-paced, too assuming, although some people find this preachy, we think we get the message across.

We just expected this movie to be a little more emotional, taking its time to build the characters, especially Max De Costa played  by Matt Damon, an ex-convict who is only desire in life is to get into Elysium. Somewhere in the movie, he gets exposed to radiation and that even pushed him further.

As I watched the film I could not help but think about District 9. It is inevitable not to think about it since they have the same director however we will refer to Elysium as a let down.

My favorite character is that of Kruger, funny and just so memorable. I also thought Jodie Foster should have been given more time, before she dies, oh there you go, spoiler, but uh, she nailed it though.

Matt Damon undoubtedly gave justice to his character, but  again, the pacing was just too fast, we felt like Max had the same fate that Clark Kent got in Man of Steel. Because it's an action movie, you felt like everything is rushed and they had to go to the next scene.

Overall, the movie is rated 7.1 out of 10. Go watch this movie with political science students. They will help you explain things.