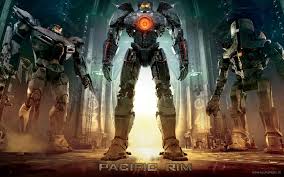 Alright so Pacific Rim is now showing in the Philippines, cinemas were not as packed as expected, there were two cineplexes showing the movie today particularly in Ayala, there are I think 3 cineplexes in SM City that screen it.

The movie is a science fiction set in a near future, not distant, where nations around the world have come together to fight aliens, in the form of giant monsters that came out from portals beneath the sea, particularly in the Pacific Ocean, more like blackholes that send these giant creatures to the surface.


There will be spoilers here in this review, so be warned.

Now first thing, who and why you should watch this movie.

Basically, it is for every age, but I think this movie goes well with the late 20s. Although the director said that he envisioned this movie as an introduction of the monsters genre that is so well known in Asian pop culture particularly in Japan, referring to Godzilla to kids.

When the trailer first came out last year, every one thought this is going to be a Power Rangers meets Transformers meets Gundam.

Well, yes, there are hints of these elements except Power Rangers.

If you’re a dad, this is a perfect way to introduce huge monsters to your kids.

The story is simple that kids can enjoy it, although there are huge robots and monsters here and destruction every where, there is no gore, except for those neon monster blood, of course there is violence, but tolerable for kids to watch, I mean Transformers movies were worse in violence.

And speaking of Transformers, of course, the thing people complain about the Hasbro adaptation was that there were too many things going on during the battle scenes too much metal, but this movie is way better, the fight scenes are well choreographed, I don’t think some scenes can be realistic as in terms of physics, but hey, this is a movie, forget about gravity, science or physics.

But talking about grounding to reality, there are some holes in the movie that can be questioned. Like why do they need to build huge robots to kill these monsters, why don’t scientists just come up with any biological weapon that will just stun the monsters.

Now, there is no clear timelines in the movie, but it seems like the events since the first appearance of the Kaijus in recent times have taken place within the last 20 years. So this movie must be in 2023 to 25.

The technology is so advanced though, you could question the expenditure on huge robots and why not channel the resources to creating weapons that will annihilate the monsters at one shot.

But hey, again this is a movie, and the director wants to show robots fighting monsters so, let’s just allow them to get away with it.

The pacing is just fine, I mean seeing huge machines fighting huge creatures can be very overwhelming and we love the fact that humor and emotion is incorporated in the movie.

Humor particularly is not that in volume, like something you get from Michael Bay movies, but it helps lighten the mood.

The movie is not serious. Acting from the main cast is just okay. Charlie Hunnam I think would make a great voice over guy, and he is so buff, he is perfect for the role.

I think the best thing about this movie is the CGI. Those battles with monsters in the ocean, which requires a lot of physics in there. Again, some science geeks will complain about it but it is still done decently.

I think of the summer movies, this could go well at number 2, following World War Z, but is better than Man of Steel which is our number 3.